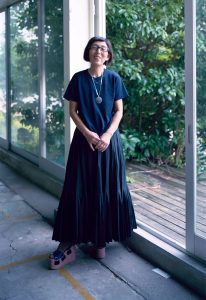 Wamono art is pleased to announce to host one day only screening event of Architecture, Time and Kazuyo Sejima at South Side Saturday on 10 September 2022. This is the first time this film is to be shown in Hong Kong. Directed and filmed by photographer Takashi Homma, the film closely follows Sejima’s creative process from conception to completion. The documentary covers the making of Sejima’s architectural masterpiece, a new building for Osaka University of Arts, over the course of three and a half years. The film shows how an architect, Sejima, tackles a single building throughout the project. Takashi Homma interviewed Sejima once every six months to explore what she was thinking at the time and how her thinking was changing. The viewer can experience how the architect’s thought process is evolving over the span of the project.

Sejima Kazuyo is a Japanese architect. Her works include 21st Century Museum of Contemporary Art, Kanazawa in Japan and Louvre-Lens, an art museum located in Lens, France. In 2010, Sejima was the second woman to receive the Pritzker Prize. In creating the new building for Osaka University of Arts, Sejima mentioned three important factors. Firstly, the building shapes need to be in harmony with its hilly environment which lead to the design of beautiful organic forms of the building. She also wanted to make the building open to the outside. Visitors can see views of the outside in different directions while they are still in the building which makes the building link the interior and exterior. Finally, she wanted to create spaces which are for people to stop by and interact. Takashi Homma has been photographing architecture done by Kenzo Tange and Le Corbusier. Homma met Sejima in the 1990’s for the first time, and then started taking photographs of Sejima’s works. The film itself is a work accomplished by the collaboration of the architect and photographer.